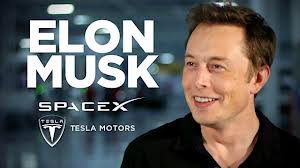 Elon Musk - the next Steve Jobs ?

Don't be Left in the Dark - Plug your Home into a Battery
CLICK the above LINK to read the Full Article.

ABOUT ELON MUSK
According to Forbes, Elon Musk net worth is approximately $12.9 billion as of May 2015 according to Forbes. South African born now one of America’s most influential men in business circles Elon Musk is a gentleman who since his childhood days has lived to inspire many to outperform their potential and to rise to global significance by grabbing opportunities and converting them to the benefit of humanity.

Meet Elon Musk
He is an engineer by profession, a philosopher and an aggressive entrepreneur whose zeal and determination to make the world a better place has stunned many. He is the brains behind PayPal – one of the world’s most trusted online global payment platforms and currently the CEO (and CTO) of SpaceX and Product architect of Tesla Motors.
CLICK above LINK to read the Full Article.

RELATED ARTICLES :
South African born Elon Musk has ventured into areas where others have feared to tread. His SpaceX operation was launched at a time the Russian and US governments dominated.
While Tesla is disrupting the vehicle market, and this progression has been boosted by the VW scandal, he’s had the tenacity to take on the giants of industry and Investec’s Roy Topol looks at his ever-expanding empire.
Topol wonders if Musk will one day be sitting alongside the innovation greats like Steve Jobs and Thomas Edison. – Stuart Lowman