The Equity Derivatives Market, formally Safex, was established in 1988 to provide a secure and efficient on-exchange market for trading Derivatives in South Africa. Today the market provides professional traders and private investors with a platform for trading Futures, Exchange Traded CFDs, Options and other sophisticated Derivatives Instruments in a liquid and transparent environment.  At their core, Derivatives represent nothing more than a legalized form of GAMBLING.  A Derivative is essentially a bet that something either will or will not happen in the future.

The Derivative is named so for a reason: its value is derived from it's underlying asset or assets. A Derivative is a Contract, but in this case the contract price is determined by the market price of the core asset. If that sounds complicated, it's because it is. The Derivatives Market adds yet another layer of complexity and is therefore not ideal for inexperienced traders looking to speculate. However, it can be used quite effectively as part of a Risk Management Program. (To get to know derivatives, read The Barnyard Basics Of Derivatives.)
Examples of common Derivatives are Forwards, Futures, Options, Swaps and Contracts-for-Difference (CFDs). Not only are these instruments complex but so too are the strategies deployed by this market's participants. There are also many Derivatives, structured products and collateralized obligations available, mainly in the Over-the-Counter (non-exchange) Market, that Professional Investors, Institutions and Hedge Fund Managers use to varying degrees but that play an insignificant role in Private Investing. 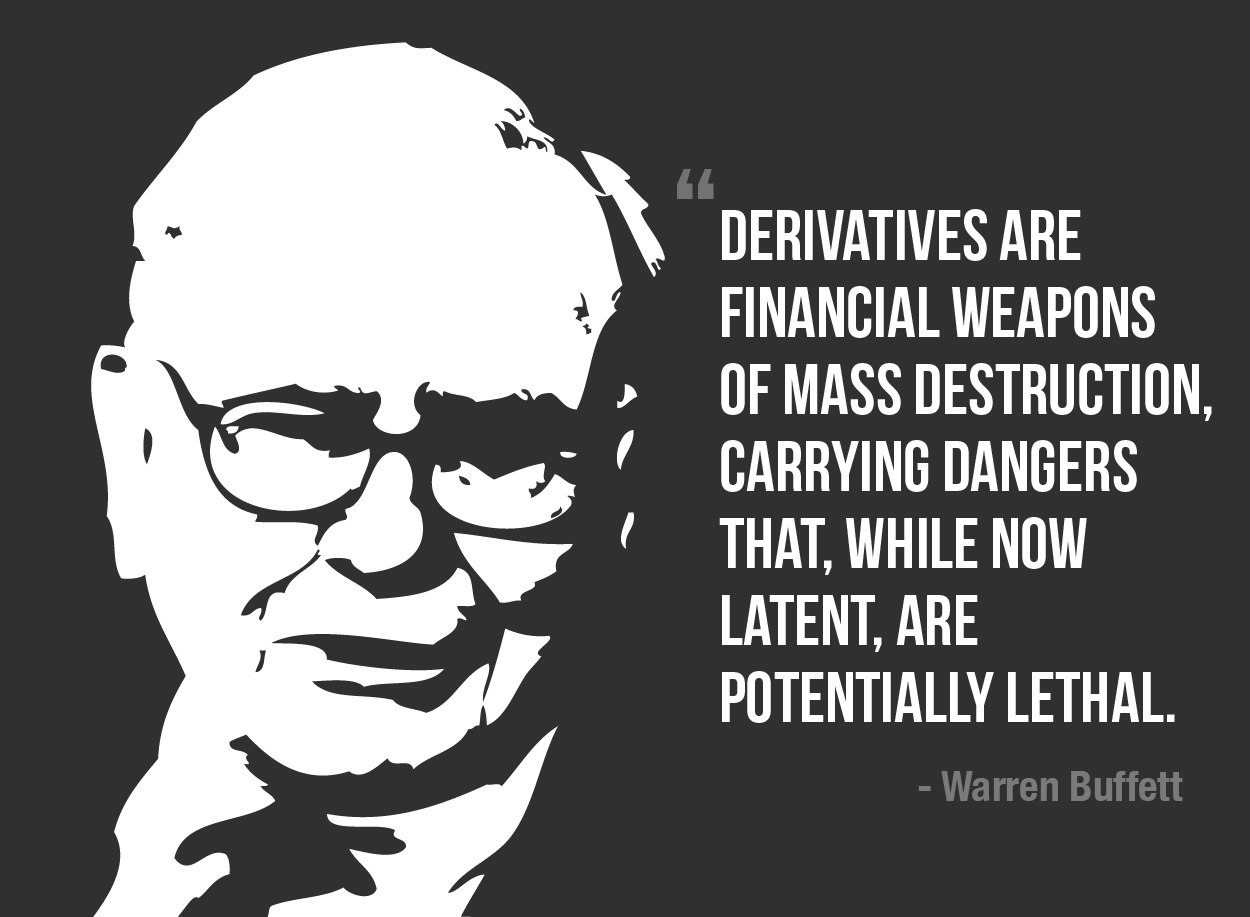 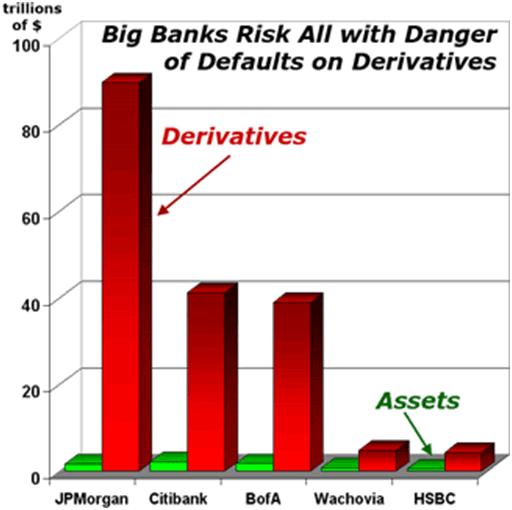 Warren Buffett: Derivatives Are Still Weapons Of Mass Destruction And ‘Are Likely To Cause Big Trouble’

After all these years, the most famous investor in the world still believes that derivatives are financial weapons of mass destruction.

And you know what?  He is exactly right.  The next great global financial collapse that so many are warning about is nearly upon us, and when it arrives derivatives are going to play a starring role.
When many people hear the word “derivatives”, they tend to tune out because it is a word that sounds very complicated.  And without a doubt, derivatives can be enormously complex.

But what I try to do is to take complex subjects and break them down into simple terms.  At their core, derivatives represent nothing more than a legalized form of GAMBLING. A derivative is essentially a bet that something either will or will not happen in the future.  Ultimately, someone will win money and someone will lose money.

There are hundreds of trillions of dollars worth of these bets floating around out there, and one of these days this gigantic time bomb is going to go off and absolutely cripple the entire global financial system.

Most of the time, the BIG BANKS that do most of the trading in these derivatives do very well. They use extremely sophisticated computer algorithms that help them come out on the winning end of these bets most of the time.

But when there is some sort of unforeseen event that suddenly causes a massive shift in the marketplace, that can cause tremendous problems.

Since the United States was first established, the U.S. government has run up a total debt of a bit more than 18 trillion dollars.  It is the biggest mountain of debt in the history of the planet, and it has grown so large that it is literally impossible for us to pay it off at this point.

That is why I keep saying that there will not be enough money in the entire world to bail everyone out when this derivatives bubble finally implodes.

Warren Buffett is entirely correct about derivatives – they truly are weapons of mass destruction that could destroy the entire global financial system at any time.

So as we move into the second half of this year and beyond, you will want to watch for terms like “derivatives crisis” or “derivatives crash” in news reports.  When derivatives start making front page news, that will be a really, really bad sign.

Our financial system has been transformed into the largest casino in the history of the planet.  For the moment, the roulette wheels are still spinning and everyone is happy.  But sooner or later, a “black swan event” will happen that nobody expected, and then all hell will break loose.

This article is brought to you courtesy of Michael Snyder.