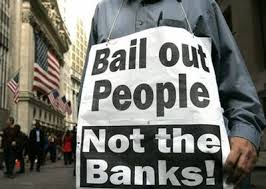 Banks - Too Big To Fail or Fall

The updated list of the world’s too big to fail banks is out today and JPMorgan Chase along with HSBC are at the top. The Financial Stability Board amends the list each year after examining Banks to decide which ones pose a threat to
the Global Economy if they were  to fail.

Some Ugly Truths about the Bank Bailouts

More than 4 million Americans lost their homes in the wake of the financial crisis, but the vast majority of lenders (Banks) survived through government assistance rushed to Wall Street in the fall of 2008.

The main bailout vehicle, the Troubled Asset Relief Program, (TARP) was hailed six months ago as a success by the Treasury Department. That came after Popular Inc., one of TARP’s repayment laggards, paid the $1.22 billion due to taxpayers.
Of the 707 banks that initially participated in TARP, 134 still are in the program. More than 280 banks exited the program without repaying its disbursements in full.

Then, of course, there is the issue of the money that was supposed to go to struggling home-owners. At the start of TARP $45.6 billion was set aside for principal reduction and refinancing (Making Home Affordable program). At the end of last year, less than a quarter of the money, $9.9 billion, had been used.

More importantly, TARP wasn’t just a bank bailout. It was supposed to help homeowners stay in their homes. That there were between 4 million to 6 million foreclosures since the crisis suggest TARP ultimately failed in this area. 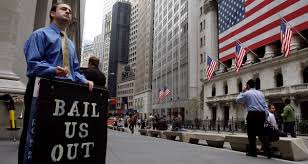 No Bailouts for Consumers !

Who is really being bailed out in Greece ?

Analysis : An estimated 90 percent of bailout funds have gone to financial institutions – not to help Greek residents.

Greece needs a cash infusion 50 billion euros ($55 billion) over the next three years to recover from its debt crisis and stabilize the economy, the International Monetary Fund (IMF) said Thursday.

But Greece already received 240 billion euros ($265 billion) in bailouts in the last five years — a sum greater than the country’s GDP. Yet that massive injection of cash has done little to mitigate the suffering of the Greek people.
More than a quarter of the workforce remains unemployed, food insecurity is on the rise, and financial analysts say the country’s public infrastructure is badly underfunded. In effect, Greek citizens are still waiting for a bailout.
So where did all that money from Greece’s first two rescue packages go ? Back to creditors, mostly. “This is a giant creditor-debtor standoff,” said Mark Blyth, a professor of political economy at Brown University and the author of “Austerity: The History of a Dangerous Idea.” “The creditors have been made whole.”
The Greek government was 317 billion euros in debt at the end of last year, Jones calculated. Of that amount, 247.8 billion euros — about 78 percent — is owed to the IMF, the European Union and the European Central Bank (ECB). The IMF, ECB and European Commission, the executive branch of the EU, are collectively known as the troika, the group of international institutions charged with managing the Greek debt crisis.
The IMF commands more than $1 trillion in total bailout funds. Greece accounts for roughly 2 percent of economic activity in the eurozone.