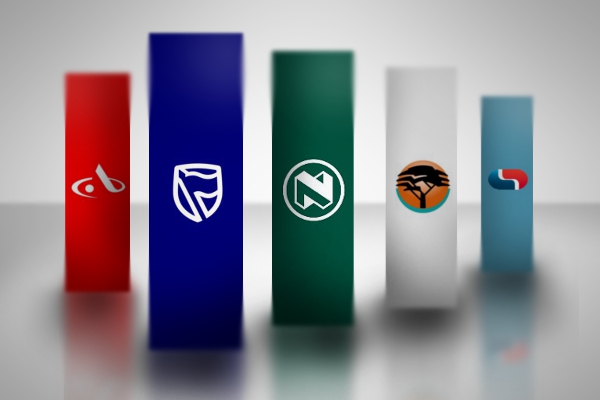 Pushing into 2015, with further stumbles by Standard Bank, the FirstRand Group remained firm in the lead position with a market cap of R320.4 billion, versus Standard Bank’s R280 billion.

Battle to be the Biggest Bank in SA

Looking at the latest full-year data from South Africa’s biggest retail banks, there is a clear battle between FirstRand and Standard Bank Group to be the biggest bank in the country.

Standard Bank recently released its full-year results for the 2014 financial year, the last of the big five banks to do so.
With all the full year data at hand (including the 2015 full year data for Capitec), we are able to paint the current standings of the South African retail banking market.

The last measure for title of the “biggest” looks at revenue, and more importantly, profits.
Standard Bank boosted both revenue and profit by 15% in 2014, pushing the former up to R84.2 billion, and the latter to R18.1 billion.

FirstRand prefers to report normalised results, believing it to be the most accurate reflection of its economic performance. The group reported a boost in normalised earnings to R18.7 billion in 2014 – making it the biggest profit spinner of all the banking groups – though the breakdown of FNB’s financial performance provides more insight into the bank’s income at retail level.

How Much SA’s Banking CEOs Earn

Nedbank CEO, Mike Brown was once again the top earner in the retail banking sector, taking home a base salary of R7 million in 2014, with bonuses and share options pushing his final take to R35 million – a 7.7% increase from the year prior.
Looking at basic salaries alone, FirstRand’s chief executive, Sizwe Nxasana has the biggest guaranteed paycheque at R8.5 million, with bonuses pushing the final tally up to R29.5 million.
Absa bank boss, Maria Ramos, saw her pay shrink slightly to R28.5 million, down from R28.6 million in the year before.
By far the biggest “losers” in the banking sector were Standard Bank’s joint CEOs, Ben Kruger and Sim Tshabalala, who, after a tough year at the bank, saw their bonuses truncated, leading to a 34% and 15% dip in total earnings for the duo, respectively. In 2014, Standard Bank suffered from a sub-par performance in its London operations, which saw flat growth in earnings for the financial year.
According to remuneration committee chairman, Ted Woods, the group held that accountability should be “inextricably linked” to remuneration, which saw the bank’s top executives take the blow.
Despite losing out on the bonuses, Standard Bank’s joint executives still took home paycheques totalling R19 million for Kruger, and R24.3 million for Tshabalala.
Two of the lowest earners for the sector in 2014 were relative newcomers to the top jobs – FNB CEO Jacques Celliers, who took over the reins at the bank from Michael Jordaan in 2014, as well as Capitec CEO, Gerrie Fourie, who took over from retired boss, Riaan Stassen. Celliers’ paycheque of R13.5 million was a step under Jordaan’s pay of R22.1 million in 2013, though the latter exec still received R4 million from FNB in the year. Fourie’s pay was a bit higher than Stassen’s final take at R10.3 million, including share options.
In total, the seven banking executives took home R160.2 million between them, at an average of R22.9 million each.
To Read the Full Article - CLICK HERE