A Financial Intermediary that performs a variety of services. Investment Banks specialize in large and complex financial transactions such as underwriting, acting as an intermediary between a securities issuer and the investing public, facilitating mergers and other corporate reorganizations, and acting as a broker and/or financial adviser for institutional clients. Major Investment Banks include Barclays, BofA Merrill Lynch, Warburgs, Goldman Sachs, Deutsche Bank, JP Morgan, Morgan Stanley, Salomon Brothers, UBS, Credit Suisse, Citibank and Lazard.

WHAT  INVESTMENT  BANKS  DO

A key role is the Issuance of Securities for a Listed company, either through an IPO or a Secondary Issue, in order to raise capital for expansion. Investment Banks also provide loans, often for millions of dollars, to companies that prefer debt as a means to raise capital. This is also known as Merchant Banking.
Other tasks include providing investment advice to and broking on behalf of Institutional Investors, and acting as an intermediary where a client is engaged in Mergers and Acquisitions. Many Investment Banks have their own trading floor, where their staff traders can buy and sell securities on behalf of their clients. They also manage Pension Funds and other large investments.
Investment Banks are usually regulated by the Central Bank of the country in which they operate and/or a specific regulatory authority.

Whale of a fine: after blowing $6bn, JP Morgan's trader costs another $920m

Last spring the City of London was rife with rumours about a trader at the vast JP Morgan Investment Bank who was making such huge bets on the highly complex – and deeply risky – derivatives markets that he was known as "the London Whale" or "Voldemort". After racking up losses of $6bn (£3.7bn) from his reckless trading, the London Whale blew another hole in the bank on Thursday – landing the Wall Street firm with one of the largest fines ever levied against a single bank.   CLICK the above LINK in Red to get all the details.

The penalty is the biggest in a seven-year rate-rigging investigation by regulators who have accused some of the world's largest financial institutions of tainting markets with fraud and collusion. It takes the total fines imposed to around $8.5bn. Twenty-one people also have faced criminal charges.

Deutsche Bank's settlement dwarfs the previous $1.5bn record demanded in 2012 from Switzerland's UBS. Two former UBS traders have been criminally charged and its Japanese unit has pleaded guilty to US wire fraud charges.

Allegations that bank and brokerage staff attempted to rig rates such as Libor, the average rate at which banks say they can borrow from each other in different currencies, emerged during the credit crisis in 2008.  CLICK the above LINK for Full Article. 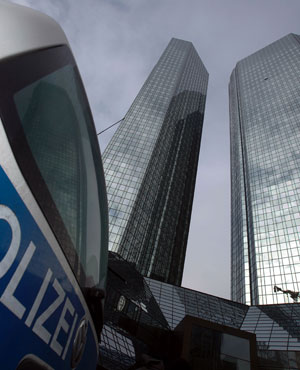 Gambino was an associate general counsel and a managing director who worked for the German bank for 11 years, according to the Wall Street Journal, which first reported his death. He died by hanging, said Julie Bolcer, spokesperson for the New York City office of chief medical examiner. The manner of death was suicide.
Deutsche, Germany's biggest lender, has already paid €6bn ($7.7bn) in fines and settlements in the past two and a half years. It expects to post litigation costs of €894m alone for the third quarter of 2014. CLICK the above LINK for Full Article.

What is Investment Banking ?

An Investment Bank is a financial institution that assists wealthy individuals, corporations, and governments in raising capital by underwriting and/or acting as the client’s agent in the issuance of securities.  An investment bank may also assist companies with mergers and acquisitions and may provide support services in market making and trading of various securities.  The primary services of an investment bank include : corporate finance,  M&A, equity research, sales & trading, and asset management. Investment Banks earn profit by charging fees and commissions for providing these services and other kinds of financial and business advice.  Click HERE  for more  Q & A  Information.

So what does an investment bank actually do ? Several things, actually. Below we break down each of the major functions of the investment bank, and provide a brief review of the changes that have shaped the investment banking industry through the aftermath of the 2008 financial crisis.  CLICK the above LINK in Red to get all the details.

Goldman Sachs Says Sorry For The Housing and Credit Crisis

Goldman Sachs CEO Lloyd Blankfein said he was sorry for the role Goldman Sachs played in the housing crisis :  " We participated in things that were clearly wrong and have reason to regret," Blankfein reportedly said, adding " we apologize."

Presumably, Blankfein is sorry for the role Goldman Sachs played in "cycling cheap credit." In 2006 and 2007, Goldman Sachs sold $40 billion in securities backed by 200,000 risky, exotic, and sub-prime mortgages. The company promoted the securities as triple-A rated investments - the safest kind of investing except for government bonds and T-Bills.

So, maybe Blankfein is sorry that his company is so good at wrapping up garbage and selling it as a birthday present.  CLICK the above Red LINK to read the Full Article.

Why I Am Leaving Goldman Sachs

What are three quick ways to become a " Leader " at Goldman Sachs ?

a) Execute on the firm’s “axes,” which is Goldman-speak for persuading your clients to invest in the stocks or other products that we are trying to get rid of because they are not seen as having a lot of potential profit.

b) “Hunt Elephants.” In English: get your clients — some of whom are sophisticated, and some of whom aren’t — to trade whatever will bring the biggest profit to Goldman. Call me old-fashion-ed, but I don’t like selling my clients a product that is wrong for them.

c) Find yourself sitting in a seat where your job is to trade any illiquid, opaque product with a three-letter acronym.  CLICK the above Red LINK to read the full Article.